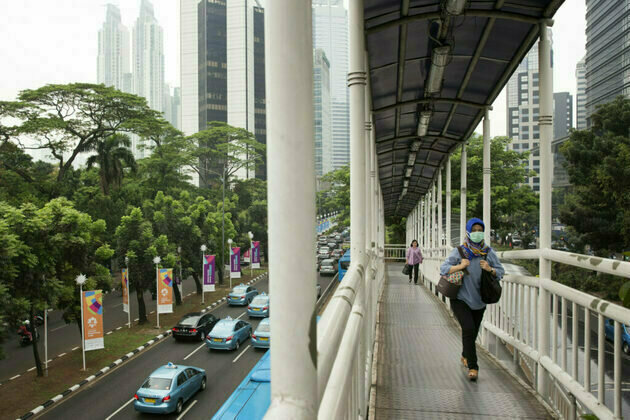 The Indonesian capital's air quality is already bad. Emissions from vehicles commuting from its fringes worsens the situation.

Jakarta is well known for its smog. A large urban city with over 10 million people, health costs due to air pollution in Jakarta  were estimated at 38.5 billion rupiah or US$4.3 million in 2010. But not all the air pollution comes from within the city limits.

Much of the air pollution drifts from surrounding areas,  or is ferried in as commuters descend on the capital daily. It's a situation that makes managing pollution even more challenging.

Air pollution is already estimated to cause 123,000 premature deaths in Indonesia annually, putting it in the top 10 worst countries for air-pollution deaths. Air pollution related illness and diesease, including asthma, pneumonia and coronary artery disease affected 57.8 percent  of Jakarta's population in 2010; and could cause Jakartans to die 2.3 years early,

On bright sunny days, photochemical smog is common in Jakarta. The hazy grey-brown sky is the result of air pollutants reacting with sunlight. In the polluted atmosphere of Jakarta, with abundant sunshine all year around, Jakarta's people voiced their concerns. A citizen lawsuit on air pollution was filed against the government, demanding strong emissions standards. They won in 2021.

Air pollution severity is recorded in Jakarta's many monitoring stations. Ozone, as well as coarse (PM10) and fine (PM 2.5) soot particles are the measures most frequently in violation of the ambient air quality standards. These are also the pollutants that are commonly found in photochemical smog.

Jakarta has work to do on managing emissions within its boundaries, particularly from the transport sector. Eighty five percent of its area has been built up and packed by residential development and dense road networks. In addition to exposure outside, the proximity of roads and houses could increase the health risks of air pollution due to intrusion of outdoor air pollutants to indoors.

Eighty five percent of Jakarta's motorised transport is private vehicles; public transport is less than 10 percent. Statistics from 2020 showed the number of motorised vehicles registered in Jakarta is more than 20 million, and it's increasing. On average, that's two vehicles per person.

Apart from vehicles registered in Jakarta, the emissions from commuters also contribute to emissions in Jakarta. Around 2.2 million people from nearby West Java and Banten Province cities commute to work in Jakarta; 72 percent of them in private vehicles.

To develop a more effective strategy within Jakarta, coordination for emission reduction policies with the neighbouring jurisdictions is being explored.

Over 90 percent  of the tested vehicles complied with emission standards, but  the root of the problem is that the sheer number of vehicles is just too huge. The Metropolitan Greater Jakarta Traffic Directorate reports 22 million vehicle trips within the area daily.

As with so many cities globally, a shift to public transport, backed by transit-based spatial planning is the way to eliminate the bulk of air pollution. This planning cannot be done separately from the seven cities in the neighbouring provinces.

The relevant agency plans to  finalise public transport infrastructures by 2024 for a target of shifting 60 percent of private vehicles to public transport by 2030. But promoting public transport will mean pushing people from their comfort zone of door-to-door transportation, particularly by motorcycles.

Public education campaigns and other soft intervention such as gamification could increase consciousness of air pollution and provide motivation for public-transport use and non-motorised transport.

The Jakarta air pollution control strategy also emphasises the use of much less polluted fuels, for example natural gas and electric in the entire fleets of public vehicles. Taking lessons from the pandemic by promoting working from home to private sectors could further reduce trips; air quality data shows it effectively reduced air pollution levels during the pandemic.

Driejana is an associate professor in the Faculty of Civil and Environmental Engineering, Institut Teknologi Bandung, Bandung, Indonesia. Her research interest is in air quality management and policy; air quality monitoring; air quality and health. Dr. Driejana is the leading expert for Jakarta's Grand Design in Air Pollution Control.

The study was funded by Jakarta Province Environment Agency.