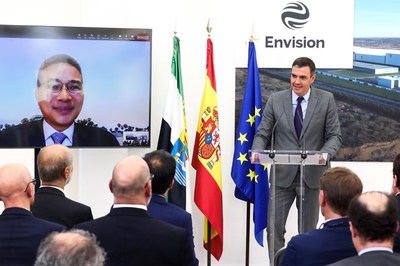 Envision's partnership with the Spanish Government covers a wide range of innovative collaborations in the next five years across various regions of the country, under the umbrella of the first industrial cluster of net carbon emissions in Europe. Under the agreement, the first phase of Net Zero Industrial Park, these are: a gigafactory for batteries for electric vehicles in Navalmoral de la Mata (Extremadura); a center for development and innovation in the digitization of renewable energy systems; a green hydrogen generation plant for the manufacture of electrolysers in Alcazar de San Juan (Ciudad Real); and a wind power generation and smart wind turbine assembly plant in Las Navas del Marques (Avila).

It is believed that this business-government partnership will catalyze Spain's net zero transition and creation of new industry, not only for Spain but also as an important part of Europe's "building back better" program.

Lei Zhang, CEO of Envision said "We are fully committed to supporting Spain's national agenda on net zero transition. The creation of new industrial opportunities such as the Net Zero Industrial Park will unlock the vast potential of renewable energy in Spain and serve as a gateway to building a pan-European greentech industrial ecosystem."

The electric vehicle battery gigafactory in Navalmoral de la Mata will have a capacity of up to 50 GWh in phase 1 and will create 3,000 green jobs with high added value when it is operational in 2025. The gigafactory is part of the VENERGY+ Project, which consists of 12 partners from 10 Autonomous Communities in which suppliers of vehicle parts and components would be located using advanced technology as part of an integrated battery ecosystem. The project has been submitted to the PERTE VEC (Strategic Project for Economic Recovery and Transformation) for the Electric and Connected Vehicle, whose provisional resolution with the winning bids is expected by the end of August 2022.

As the net zero technology partner of global companies and governments, Envision aims to develop 100 Net Zero Industrial Parks in the next decade globally, reducing global carbon emissions by 1 billion tons per year. 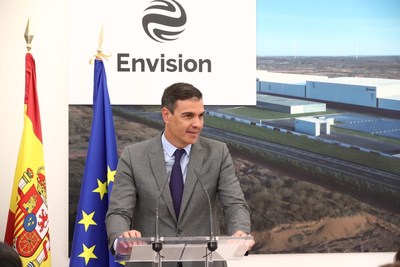